Monitoring Month Part 3: A look into the history and sound characteristics of Yamaha's classic NS-10 speaker.

In the world of professional studio equipment, the word ‘iconic’ tends to be reserved for the top end of town: beautiful pieces of vintage precision equipment, boasting the finest in premium components and assemblage, the likes of which have cultivated a fervent following amongst audio’s elite over the course of decades (and with the discography to prove it).

For the select few products that fall into this category, so much of their reputation, popularity and price tag has been built on a proven ability to provide consistent, replicable results, day in, day out, lending their pleasant sonic signature in ways that enhance and improve the overall recorded output.

It’s in this context that the story of the Yamaha NS-10 is made even more remarkable.

Despite all odds, this ill-fated, notoriously unpleasant consumer grade hi-fi speaker has proven to be one of the most enduring mainstays in recording studio culture. Its singular voicing and instantly definable silhouette make it the most recognised Studio Monitor in the world, even some 20 years after being discontinued.

Chuck on any ‘behind the scenes’ documentary about a famous record from the last 50 years and odds are, you will see at least one of the gloss black, brutally angular wooden enclosures—accented by a wood pulp, white dyed LF driver of course—lurking somewhere in the background. It’s as synonymous with studio as the Stratocaster or Les Paul are with the guitar.

And yet, it is this aforementioned LF driver (if you can call it that) that is at the heart of why the NS-10 has become both an equally coveted, and criticised part of Studio lore. A debate no doubt exacerbated by the recent influx of interest in home recording and DIY production.

This difference in opinion seems to stem from what we as recording people hold to be self evident—that so much of the online commentary surrounding gear is based on anecdotal personal experience and hearsay. And as we all know in Audio, there are at least a hundred different variables influencing your experience at any one time.

In the case of the Yamaha NS-10, the fact that they are—(a) passive and (b) relatively scarce—almost immediately puts them in the too hard basket for a lot of beginner engineers, and even those who are brave enough to take the plunge are often left bemused or even humbled by their brutal, painfully revealing frequency response and rapid fire excursion/recoil properties.

NS-10’s don’t care for your ego. They don’t care for your enjoyment. If you are the kind of engineer fueled on good vibes and positive feedback from others in the room, then these aren’t for you. A healthy bump above 1kHz and a steep rolloff below 100hz ensures that anything running through them sounds immediately hi-passed and resonant, and yet it is in this unorthodox (at times unpleasant) voicing that so much of their value lies. Moving the NS-10 from homes to studios

The brainchild of legendary Yamaha speaker designer Akira Nakamura, launched in 1978 to very little fanfare in Japan. It was a chance encounter with an American recording engineer by the name of Greg Ladanyi that plucked the NS-10 from relative obscurity and kickstarted its rise to industry dominance.

What Ladanyi was looking for was a speaker that would act as something of a real-world simulation of the average consumer listening environment, something to take back to the US as a reference (not primary) monitor.

What Ladanyi hadn’t taken into account was chief designer Nakamura’s lifelong obsession with acoustic pressure frequency properties and absolute disdain for consumer level workarounds in regards to harmonic distortion and the industry wide intentional smearing of low frequency errors to mask limitations in driver design so prevalent in the hi-fi business.

This refusal to sacrifice transient speed and clarity at the expense of low frequency extension gave the nimble, unported NS-10’s a particularly unique and unflattering frequency response, heavily weighted towards the mid-range. This made the NS-10 horrible for casual listening in the context of home Hi-Fi, but worth its weight in gold as a nearfield studio monitor, especially in the context of the guitar (and midrange dominant) 1970s.

While it was Ladanyi that can largely be credited with bringing the Yamaha NS-10 to America, it was a soon to be legendary engineer by the name of Bob Clearmountain who popularised them and made them the icon they are today. Clearmountain’s run of successful albums with artists like David Bowie and Bruce Springsteen proved that hit records could be made and mixed entirely on NS-10s and it was also Clearmountain who is largely credited with the famous trick of covering the NS-10s tweeters with tissue paper to offset some of the apparent brightness of the speaker (Yamaha would take note, later releasing the NS-10 Studio, with attenuated highs in the tweeters, to mimic the effect).

If Clearmountain is largely responsible for the popularisation of the NS-10 from a frequency standpoint, full credit must be given to the Lord-Alge brothers (Tom and Chris) and their mastery of the NS-10 as a monitor for dynamics. Operating out of New York’s Unique Recording Studios, the brothers Lord-Alge pioneered the use of extreme compression techniques in the pop-sphere, using the Yamaha NS-10s lightning fast transient response characteristics to help find the limitations of dynamic processing, and in the process crafting some of the most memorable mixes of the 1980’s and beyond.

But what is it about the sound profile of the NS-10m that makes it such an adept mix tool, beloved by industry professionals in spite of the obvious and apparent technical limitations listed on the spec sheet? Sound characteristics of the NS-10

While the popular theory is that if a mix sounds good on NS-10s (a revealing, uncompromising speaker with a hornets nest for a frequency curve) then it will sound exceptional on anything else definitely holds a lot of weight, but it fails to take into account the manner in which this frequency curve affects our decision making process and naturally guides us to a baseline level of translatability.

As a monitor for timbre, Yamaha NS-10s may well be the greatest of all time. Sure, they aren’t going to win many friends for full range mastering work or for levelling out sub-frequency material, but for balancing mid-range harmonics and identifying sonic character in the most sensitive frequencies of all, they are invaluable, with an ability to find space in the mids where others can’t.

This is only bolstered by the NS-10s incredibly fast recoil properties and the amount of clarity this provides, especially in the low-mids. The ability to have these frequencies dissipate almost instantly is incredibly helpful for isolating mud and masking elements as well as providing a surgical representation of the harmonic relationships that make up many of the most important elements in a mix.

This unorthodox (some would say extreme) voicing also means that they are one of the best monitors out there to calibrate your ear at the electro-acoustic level, to the point where learning to mix on them has become a rite-de-passage for developing engineers in the professional space. Their singular, uncompromising character means that regardless of what room you put your them in or how well you treat the space, they will never be able to fully shake their inherent ‘NS10-ness’, which is a controlled variable that we can use to our advantage in various studio environments, if we can train our ear to recognise the most obvious sonic characteristics and adjust accordingly.

This is also one of the reasons that we see so many NS-10s erroneously placed horizontally on the meter-bridge. If you have the ability to recognise good, useable sound as produced through the lens of the Yamaha NS-10, then quickly pulling up a sound from the live room, or double checking a mic placement, can be done so quickly and efficiently (and with less of an onus on ideal monitor placement), much like what we see in the utilitarian world of outside broadcast.

As a passive speaker, the NS-10 is powered by an external power amplifier, and the list of options available are only rivalled by the opinions on what’s the best amp to pair them with, whether you’re using the original NS-10 or a variant, built before production was ceased in 2001 (legend has it, as a result of a global shortage and subsequent extinction of the tree previously used to make the low-frequency drivers.)

As is to be expected for a product as popular as the original Yamaha NS-10, the eventual success of the speaker led to an expanded product line, with different variants and revisions coming out over it’s twenty year product cycle.

The original (and some would argue the most coveted) is a vertical box, easily recognisable by its “Yamaha NS-10M” badge placed horizontally besides the high frequency tweeter. Remember that this was designed to be a domestic, bookshelf speaker designed for general listening, thus it shipped with a consumer style speaker grille over the delicate drivers. The little indents in the corners (required to mount this speaker grille) is one of the defining features of the original NS-10.

The NS-10M Studio, introduced in 1987, was a horizontally oriented version of the NS-10M, introduced by Yamaha after they noticed engineers laying them sideways to change the way the mid response of the speakers hit their ears. This new iteration of the classic speaker also featured a re-designed high frequency tweeter to address the HF issues engineers had previously been solving with tissue paper.

The crossover point of the mid-driver was also attuned to assist in softening the harsh high-end. Yamaha also improved the NS-10M Studio’s power handling to make them more compatible with modern power amplifiers and listening conditions during the 80s and into the 90s, as well as improved terminals to connect them to amplifiers.

Further variations were introduced throughout the 80s, some of which you’ll still find used in trade groups and gear forums quite often. The NS-10M Pro is a hybrid of the NS-10M and NS-10M Studio, i.e. a vertically oriented speaker. It differentiates itself from the original 1978 NS-10M by having the improved terminals of the NS-10M Studio.

A little bit of research may lead you down the rabbit hole of NS-10 variants, and you’ll eventually stumble across the mammoth NS-40M and NS-1000. While sharing some aesthetic attributes with their smaller, 70s-style predecessors, they’re largely different beasts. The NS-40M is a 3-way speaker with similar drivers and tweeters to the NS-10M, but a different crossover for increased bass response. They’re horizontally oriented and feature the upgraded tweeter and terminals of the NS-10M Studio.

For those looking for something capable of handling some of the more bass-centric program material served up in the modern era, Yamaha’s most recent HS7 incarnation is a powered, decidedly modern take on the NS-10’s unique topography, with an exceptionally quick transient response and amazing mid-range reproduction (but with enough low-end extension to take it well into 808 kick territory.)

We’ve only just scratched the surface when it comes to the enduring legacy the Yamaha NS-10 has had, both on studios and nearfield monitoring in general (a product category that itself hadn’t even existed prior to the NS-10 gaining popularity). Their standardisation is one of the few controlled variables we have in the recording studio and even after all these years, their instantly recognisable voicing, other worldly ability to reveal trouble spots in a mix and the exceptional speed with which they are able to reproduce transient material, is the measuring stick for all nearfield monitors since. 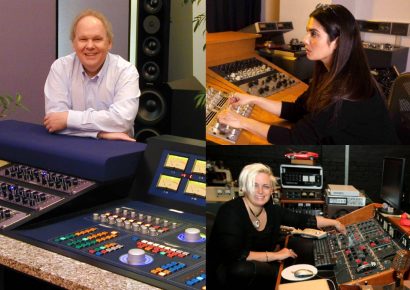