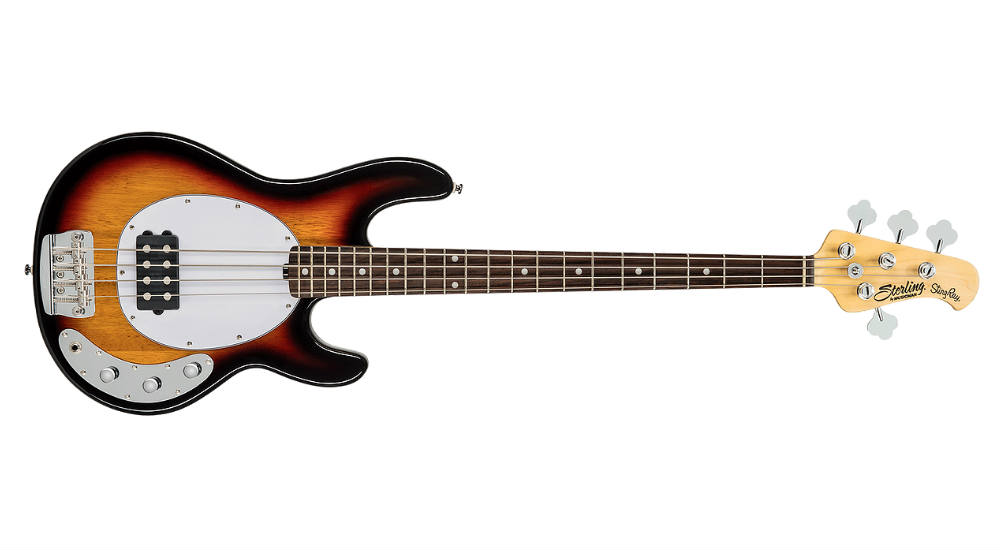 Though Sterling by Music Man is the closest equivalent to the budget ranges of Epiphone and Squier, it feels inaccurate to place them side by side. Sterling have pushed to make their affordable range feel marked by a certain level of quality that transcends typical budget construction. The Ray24 has a gleaming charm to its three-tone Vintage Sunburst finish (also available in Butterscotch), with all of the aesthetic feel of the StingRay; egg-shaped pickguard, comfortable cutouts, maple fretboard and all. The steel Sterling bridge does a reasonable job of matching Music Man’s chrome-plated hardened steel, while its maple body is fairly indistinguishable from the StingRay’s ash wood. The headstock sports the StingRay cursive, and manages to not make the Sterling by Music Man logo look like a shade of prestige – a surprisingly persuasive selling point for budget guitars.

What is immediately most striking is the Ray24’s playability. The bass is beautifully weighted, while its naturalised cut-outs make traversing the 34” fretboard a joy, particularly the higher frets. The single active pickup is powered by a small nine volt battery slot in the back, an active emulation of the StingRay’s passive Alnico humbucking. For the less discerning, its boosted signal means negligible background interference and a thicker tone.

The Ray24 gives you a simple three-dial setup of volume, treble and bass, which is certainly good enough for tonal control, albeit with plenty of fiddling. It is mystifying why a mids dial wasn’t included, and whether that’s purely for creating an arbitrary point of difference to the full-blown StingRay is hard to say. Manipulating the two-band active EQ, I found the higher end had plenty of body to it, while lows had an almost silky rigidity. Mid tones were a little more frustrating à la the lack of knob; however, with the bass turned to seven o’clock and the treble at four o’clock, I reached a punchy range. Stylistically, the Ray24’s tone worked best for jazz runs, articulating a snappy sound with its treble control, though hard rock had suitable chunk to it also. The tone’s sheer clarity and resonance was continually impressive throughout. I’d argue at the price point, nothing else offers the same dynamics.

Budget guitars are fraught purchases, even from manufacturing stalwarts Epiphone and Squier, and so Sterling by Music Man’s Ray24 is astonishing. Indistinguishably resembling the sumptuous StingRay without tacky aesthetic caveats, it offers a malleable tone better than any of its price competitors.