Following its unveiling at NAMM 2021 earlier in the year, Gretsch have today launched the 89VS Vintage Select ’89 Duo Jet series, a collection of guitars inspired by Soundgarden’s Chris Cornell.

Catch up on all the latest product news here.

Dubbed as a ‘homage to the classic late-’80s design that rocked the forefront of the Pacific Northwest grunge movement that overtook the music world in the early 1990s’, the 89VS Vintage Select ’89 Duo Jet series honours the longstanding impact of the late Soundgarden frontman, who owned several Duo Jets and can be spotted slinging one in the band’s iconic ‘Black Hole Sun’ music video.

These new models feature era-correct chambered mahogany bodies, helping to enhance their resonance and produce a refined, articulate tone. They’re paired with a set maple neck and 12″ radius rosewood fretboard with pearloid block inlays, while a Bigsby tremolo and Adjusto-Matic bridge with a rosewood base keeps things nice and sturdy.

The Gretsch 89VS also boasts a pair of TV Jones pickups, with a TV Classic Plus and TV Classic being found in the bridge and neck respectively for those classic Filter’Tron tones. They’re complemented with a versatile control layout that features a master volume, treble bleed circuit, master tone and individual pickup volume controls, with a three-way pickup selector switch letting you flip between neck, middle and bridge positions.

Find out more over at Gretsch Guitars. 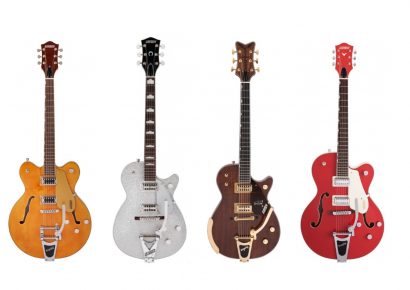