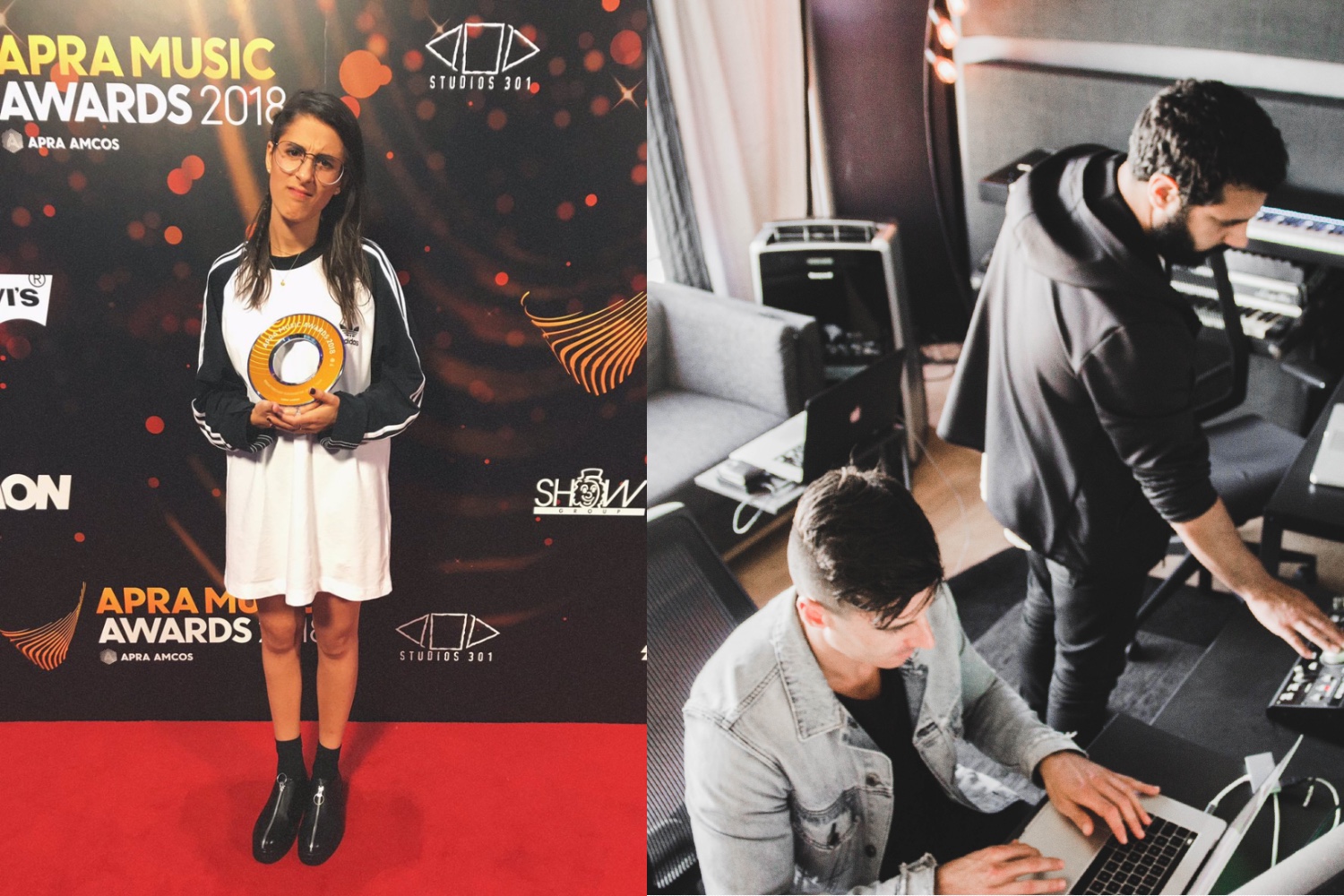 Meet the names behind some of the biggest hits on the charts.

It’s easy to think of Australia’s impact in the music industry as being limited to everything that goes on here at home, but when you dig a little deeper, there’s an abundance of Australian songwriters and producers collaborating with major artists across the world.

Read all the latest columns, features and interviews here.

From the ARIAs and the BRITs to the Grammy awards and beyond, these songwriters are writing some of the biggest songs on the Billboard charts today, working alongside major pop artists, rappers, DJs and everything else in between.

Whether it’s from their own setups at home or in famed studios around the world, these artists have co-written and produced award-winning songs for some of the biggest artists globally – often without ever batting an eyelid from those at home.

Today, we’re deep diving into the liner notes of today’s biggest pop hits to find out more about nine local expats who’ve lent their songwriting and production chops to some of the biggest acts in the world today.

Originally from Bentleigh in Melbourne, Sarah Aarons is now based in Los Angeles, signed to Sony/ATV Publishing. She went from studying Media and Communications to co-writing songs for major artists such as Dua Lipa, John Legend, Halsey and Ruel.

Sarah has been nominated and won multiple songwriter awards, one of the biggest nominations was for Song of the Year at the Grammy Awards in 2018 for ‘The Middle’. In 2019, she won Songwriter Of The Year for ‘The Middle’ at the APRA Music Awards, and it’s only looking likely she’ll maintain her chart dominance in the years ahead.

Originally from Perth and now based in Miami, Florida, Michael ‘Finatik’ Mulé and Isaac ‘Zac’ DeBoni are fast establishing themselves as the hottest property in hip-hop today.

The pair originally linked up in after Finatik, who was into DJing as a teen, bought an MPC and begun making beats, while Zac had also purchased an MPC to make beats. Meeting through mutual friends, they eventually started to make some beats together and began to hone their craft, specialising in making hard-knocking contemporary trap productions.

This later led to the pair landing placements for the likes of Big K.R.I.T and A$AP Rocky, producing ‘Excuse Me and ‘L$D’ for the latter’s 2015 smash At. Long. Last. ASAP, and subsequently going on to contribute the majority of beats to Denzel Currys’ 2019 victory lap ZUU.

More recently, FnZ contributed production to Kanye West and Travis Scott’s collaborative track ‘Wash Us In the Blood’, Kid Cud’s ‘She Knows This’ and ONEFOUR and The Kid Laroi’s ‘My City’, as well as contributing production to Drake’s ‘Lemon Pepper Freestyle’, debuting #3 on Billboard’s Hot 100 Chart in March.

From co-writing songs with A$AP Rocky to co-writing and featuring on songs with Flume, KUČKA is another Australian songwriter, producer and artist topping charts with incredible songs.

Her 2012 self-titled EP was recorded in her bedroom studio in Perth which led her to appear on two songs for A$AP Rocky’s debut album Long. Live. A$AP, including the title track ‘Long Live A$AP’ and ‘Fashion Killa’, having over 61 million streams on Spotify.

Additionally, KUČKA has co-written many songs with Flume, such as ‘Smoke & Retribution’ with Vince Staples, ‘Hyperreal’ and ‘Numb & Getting Colder’. She’s gearing up to release her debut album Wrestling this week, and we couldn’t be any more excited to see what comes next.

Singer, songwriter and producer Alexander Burnett, who’s originally from Sydney but now lives in London, is another inspiration for Australian songwriters.

After nailing a number of Triple J Hottest 100 entries with his own band Sparkadia, Burnett moved to London and became a one-man hit factory, churning out tunes and collaborating with artists like Alison Wonderland, Hayden James and George Maple.

He co-wrote George Maple’s breakthrough hit ‘Talk Talk’ in 2014 which later was reworked by DJ Snake in 2016, and produced and co-wrote a number of songs on Thelma Plum’s 2019 album Better in Blak, with the album being nominated for Album of the Year and Best Pop Release at the ARIA Awards in 2019 and the title track later winning the 2020 Vanda & Young Global Songwriting Competition.

Initially from Perth but now based in Melbourne, Evan Klar is a songwriter and producer for himself and a number of other artists.

He started off working in a local machine factory and then took some bass guitar lessons, which saw him go on to follow his passion for music and carve out a niche for himself as a songwriter.

Last year he signed with the German label Grönland Records, and co-wrote and produced Australian artist Kate Miller-Heidke’s latest album Child In Reverse, which currently has over 1 billon Spotify streams.

Alex Hope has worked with Troye Sivan, Tove Lo and Jack Antonoff (who helps co-writes and produces songs for Taylor Swift). She is one of the leading pop songwriters and producers, co-writing many songs with Troye Sivan and helped write one of his biggest hits ‘Youth’.

Alex recently got an APRA AMCOS award for ‘Youth’ reaching a billion streams. The song also won Song of the Year and Best Video at the 2016 ARIAs and Alex (Troye too) won the APRA’s Breakthrough Songwriter in 2016 and 2017.

Currently living in Los Angeles and signed with Sony Music Publishing, there is no doubt Alex will continue to co-write and produce more pop hits.

Originally from Sydney, the duo met in high school in music class bonding over music and their love for the piano. Since their high school days, they have gotten number one singles for The Veronicas’ for ‘You Ruin Me’ and ‘In My Blood’ as well as Delta Goodrem’s ‘Wings’ which has gone double-Platinum.

The duo has achieved seven #1 ARIA Singles and has sold over 2 billion units (physical, downloads/streams) from the songs they have produced and co-written on.

Growing up in New South Wales, Nat Dunn has co-written ‘FRIENDS’ for Anne-Marie and Marshmello which has over 1 billion streams on Spotify.

Not only has she done songs for Anne-Marie, but she has also had co-written songs for Noah Cyrus, ZAYN, Charli XCX, Rudimental and more. But how did she start writing songs for these major artists?

At 15 years old, she entered the industry while in high school working with a manager and going into a studio, which led to her signing a publishing deal with Mushroom Records. This is where it all started for her, and now, she’s co-writing hits in some of the biggest studios around the world.

Working with Sia, Adele, Kylie Minogue, Carly Rae Jepsen and more, Samuel Dixon is from Adelaide and is now based in London. His songs have made him a Grammy Award winner for Album of the Year and Best Pop Vocal Album in 2017 for Adele’s 25 which also won in 2016 at the BRIT Awards.

He co-wrote and produced ‘Love In The Dark’ for Adele, which has more than 64 million streams on Spotify, and has penned many a hit for Sia, including ‘Fire Meet Gasoline’, ‘Deer in Headlights’, ‘Jesus Wept’ and more.

Samuel is a producer, songwriter and musician who has joined tours with Adele and Sia as their bass guitarist and musical director – not bad for an Adelaide lad, hey?

Find out more about other successful Australian musical expats here.