More than 40 years of metal greatness

Today, we give you the low down on what he’s used over his illustrious career.

For as long as we can remember, Harris has been using his beloved mid-70s Fender Precision Bass guitar. In fact, you can find clips from the very early days of Maiden with Harris playing the same bass. His bass has had a lot of finishes over the years, however more recently he has been sporting a white finish with the West Ham Football Club emblem. Other ironclad features include a single powerful Seymour Duncan Steve Harris signature model pickup and a Fender HiMass bridge.

During a very small stint around the time of Powerslave, Harris and fellow guitarist Dave Murray were both endorsed by Lado. It was during this time that the band had experimented with a range of different sounds and tones, before reverting back to their classic stylings that made Iron Maiden the legendary act that they are today. Finding one of his Signature Unicorn Basses could be a bit of a challenge today. You may be shocked to hear this, but yes, the dirty and booming bass lines of the legendary bassist come from Harris’ 4×12 cabs. Well it isn’t just any cab; it’s a Marshall. Staying true to his UK roots, Harris has used Marshall amps for a number of years. The cabs are slightly different to the standard models however, with the units loaded with EVM12L speakers. As Harris explains, “They’ve got full duty EV speakers in them and I do get the full range, from the top right through to the bottom. It’s a good tight sound — not so much a bottom end rumble.” There isn’t too much to Steve Harris’ rig, however a Trace Elliot GP12X Pre-Amp has been spotted numerous times on stage. Trace Elliot products aren’t that well-known in the Mixdown office, however by the looks of this pre-amp, it is well kitted. The pre-amp features MIDI control, valve/solid state preamp section, 12 band graphic EQ, Harmonic Emphasis, switchable, variable valve gain, noise reduction as well as two stereo effects loops – one full range, one high pass. Since its introduction in the mid 1970’s, the dbx 160 series has been the world’s most popular line of audio compressors. Harris uses 2x DBX 160A Compressors in his rack. One is the main compressor the other is a backup, in case the main one fails. Steve Harris is endorsed by another UK brand, Rotosound, and was given his own signature bass guitar string set based on his custom gauge preference. When asked what he thought about his new signature set in an interview with Rotosound, Steve Harris said, “It’s all I’ve ever used”. The heavy gauge set is packed with so much middle and low end that Steve demands for his style of music coupled with its silky smooth finish and tone only Monel 400 can offer. 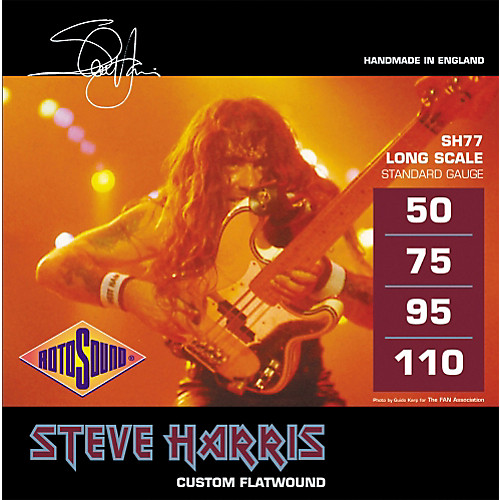 For more Iron Maiden content, check out our interview with them on Senjutsu.