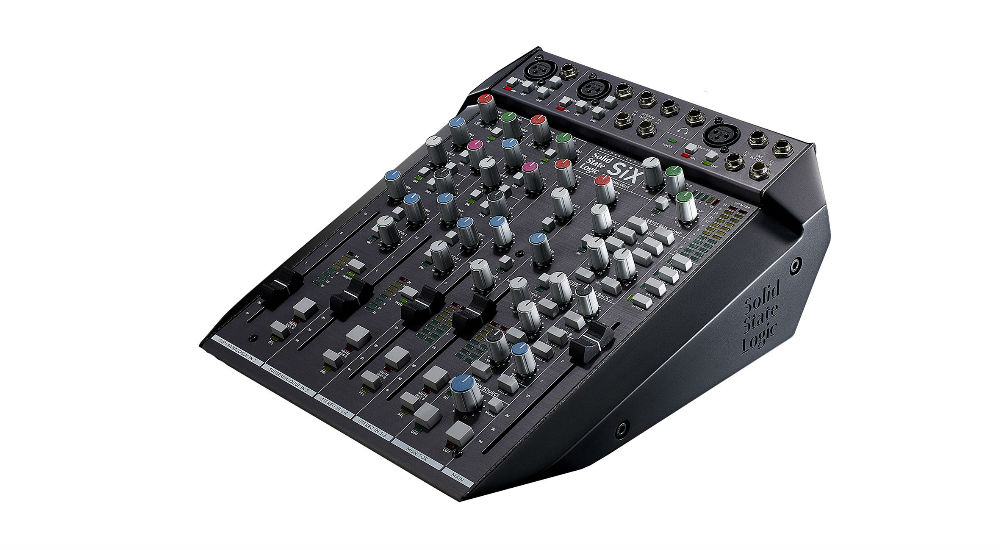 It was a decade where the price of real estate skyrocketed, while the price of recording equipment either plateaued or got cheaper, as manufacturing moved offshore and cheap knock-offs flooded the market. We saw the rise of Genelecs and TLM-103’s in bedroom studios, and more than enough Universal Audio to make a Macbook Pro visibly squirm. Brands dubbed this new kind of engineer prosumers – transitional users who were neither amateur, nor professional (at least by the age-worn definition of the term). As the decade progressed it became abundantly clear that it was in fact these prosumers who were shaping the zeitgeist – extremely talented engineers, recording hit songs from home or hotel, who nevertheless required professional grade front end to extract every bit of quality they could out of what were often, less than ideal recording situations.

Enter the SiX, Solid State Logic’s highly anticipated foray into the world of small-scale desktop prosumer mixers (and the perfect way to round out what has been a very big decade in audio).

The SiX comes off a surprisingly long gestation period for SSL. For a brand so steeped in studio lore, it was imperative that every care was taken to ensure that the budget SiX model would live up to the lofty standards set by SSL consoles past. I’m happy to report that not only does the SiX live up to expectations, in many respects, it shatters them.

Whereas traditional SSL consoles have been largely out of reach for all but the most high-end studios and post facilities, the SiX retails at a very manageable price – roughly one hundredth of the cost of a traditional, large scale SSL console like an SSL Duality 48. Therein lies the dilemma, how does a company as prestigious as SSL release a budget desktop mixer without compromising on sound or build quality? The answer lies in simplified processing and streamlined assembly.

Right off the bat, it is important to note that the SiX is not an interface. It offers no A/D conversion or USB/Thunderbolt compatibility. If it were to come with A/D conversion of a comparable quality, we would be looking at an extremely pricier unit. What the SiX is, however, is a super convenient and very affordable way for prosumers to get two state of the art SSL Channel strips into their recording chain (and with a couple of stereo line channels thrown in for good measure).

One of the defining characteristics of the SiX is it’s inclusion of many of the same legendary preamp, EQ and routing circuits that made the brand the icon that it is today (albeit in slightly parred back form). Looking across the board, we have the familiar SSL EQ section and G-Series bus compressor all accounted for, along with two of SSL’s revered ‘SuperAnalogue’ preamps. The sound quality on all of these circuits is sublime adding a sense of instant professionalism to any source that passes through.

It’s these aforementioned preamps that really exceed all expectations I had for the SiX, coming into this review. Crystalline clarity and with headroom for days, the pre’s on the SiX share all the hallmarks of the classic SSL sound. When A/B’d with a cheap consumer level interface, it was literally night and day. Nowhere was this heightened level of preamp quality more apparent than on the DI’d instruments, where the SiX’s broadband frequency capture and quality of depth could be heard in all its glory, somehow extracting goodness out of even the most perfunctory of MPC loops and PCM synth sounds.

As much as the guitar player in me longed for a mid-band, I still found the switchable, two-band EQ on the SiX to be adequately suitable for simple tone shaping and balance purposes. I’m normally a three-band or bust kind of guy, but the pleasant sonic quality and low noise of the EQ circuit definitely had me reconsidering my habits, and the inclusion of both bell and shelf EQ options (each with different corner/centre frequencies) definitely opened things up in terms of flexibility. The same could be said for the parred back version of the G-Series Bus compressor. While it is an extremely good sounding unit, its single knob operation and the lack of dedicated attack and release functions could scare off users who are used to the endless parameters and full-scale tweakability of the modern DAW workflow.

That is not to say that the SiX isn’t extremely adept at what it does. As a centrepiece for the modern project studio, few mixers have ever offered the kind of pristine audio quality on display here, but the less-is-more approach to on-board processing (which makes perfect sense in the conservative tradition of committing sound to tape) may go over the heads of beginner engineers or people who have grown up adding +10db quarter octave boosts at random points on the frequency spectrum.

Don’t think for a second that this is a knock on the SiX – I would gladly take professional level capture and an exceptionally low noise floor over an attack knob any day of the week. It’s just important to acknowledge the SiX, for what it is, is a truly professional front end for the modern recording chain, with just enough on-board processing to get you in the ballpark prior to mix. Besides, when it comes to bells and whistle, I’d happily take a handful of high end over a boatload of budget, every single time.