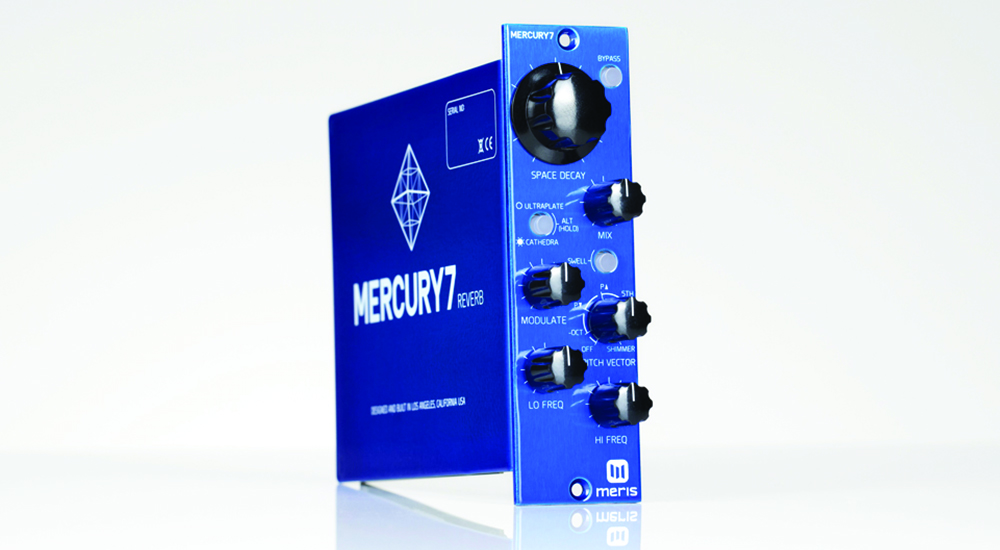 MORE THAN JUST A PLATE

I am often guilty of just jumping to a favourite plate reverb and pulling up some standard settings before making it fit in a mix so that the reverb really doesn’t stand out at all. And if that is what you are looking for, the Mercury7 is probably not for you. But for many of you who understand how a reverb device can be used as an instrument to give more life to your music, you will love what can be achieved with the Mercury7. The two reverbs on offer are the Plate and Cathedral setting, but they offer far more than the titles suggest. As with other Meris modules, the knobs and buttons generally have multi-functions with the addition of an alt key that wildly opens up the possibilities within the unit. Furthermore, a pair of Mercury7s can be linked with a stereo linking cable so the second unit’s controls slave off the first’s for stereo applications.

This is a reverb device that needs to be heard to be understood. It is increbibly musical and offers so much variety that you will most likely waste days just listening to the sounds it can create. In a design that was inspired by the reverbs used in Vangelis’s soundtrack to Blade Runner, you can take control of every stage of the reverb from the pre-delay right up to the last moment of the decay. The Space Decay control at the top of the unit really enhances this feature when combined with the Pitch Vector control. This was my favourite part and one that made me want to listen to the reverb and not really pay any attention to the notes from which it was created. The ability to have the decaying sound vary in pitch is brilliant; especially the Pitch Down and Pitch Up features which have the notes drift off in a dreamscape of colour. It sounds like a Replicant was walking into the room; the effect comes that close to the sounds from the film. If you don’t own a 500 series rack, this device could well be the tipping point to get one into your studio. After you hear what it can do, you will understand that the reverb tank is more than just a bunch of springs.