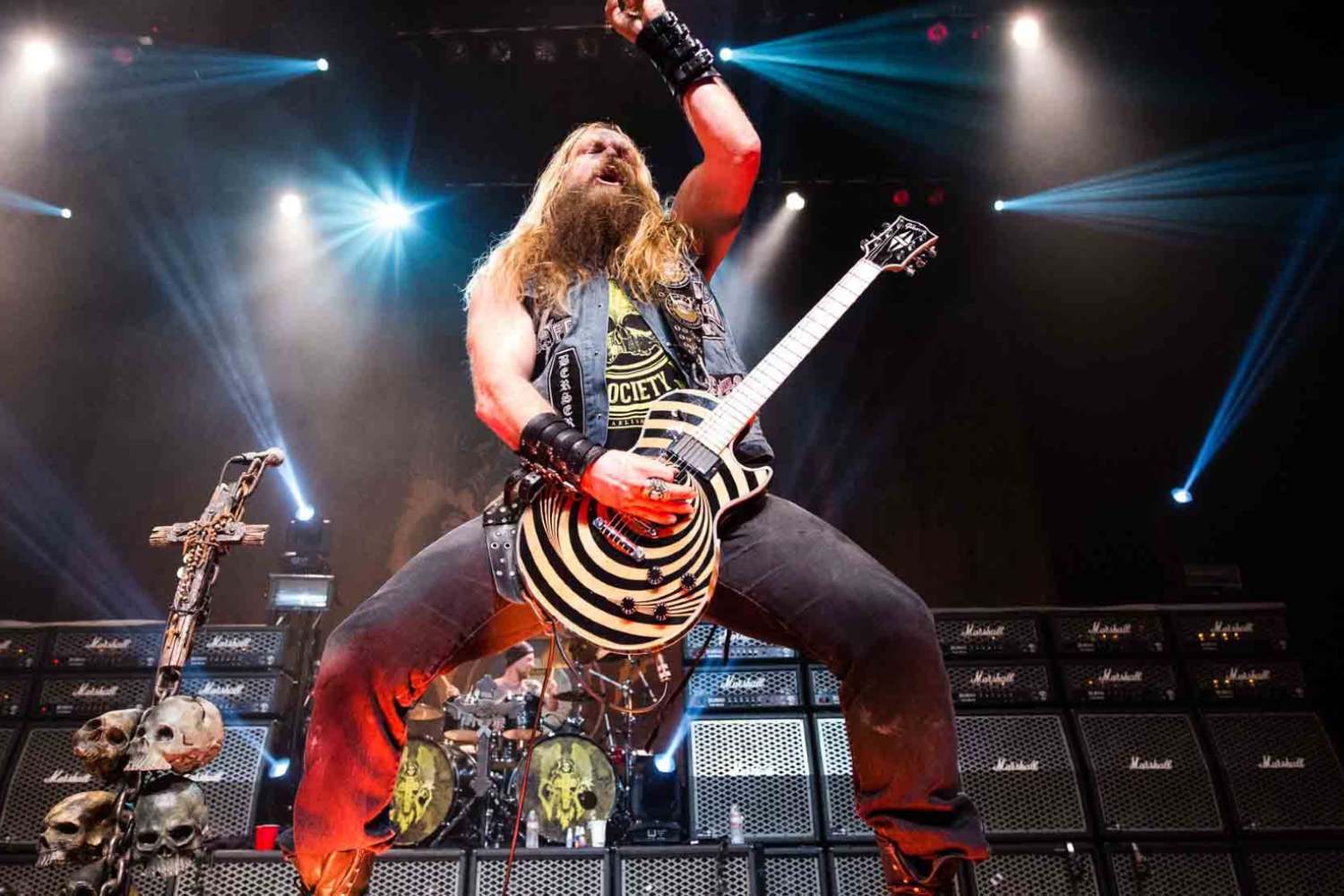 Laying out the gear of one of the greats

Splitting time with Ozzy Osbourne and the Black Label Society, Zakk Wylde is a genuine metal legend. With a partiality to hard riffs and fiery solos, the dude could shred glass.

Check out his gear rundown below. “The first one I actually had was Gibson Pelham Blue SG Firebrand,” said Wylde. “It was actually really cool. I ended up getting rid of it because I wanted to save up for a Les Paul Custom or something like that, but it was a kick-ass guitar. When I look back, I wish I’d saved that thing. It was also unusual because it didn’t have a rosewood fingerboard – it had an ebony fingerboard, and it had just round inlay markers. That was a killer guitar. I had to have been maybe 15 or so when I got it, and I probably had it until I was maybe 16, 17, something like that, before I decided I had to get that Les Paul instead.”

This was bought  as it resembled the instrument being played by Wylde’s hero, Randy Rhoades of the Ozzy Osbourne band. Wylde put a $500 downpayment on this $800 guitar, which was being sold new from the dealer, and his parents surprised him by chipping in the final amount on the day of his high school graduation.

Procured at the very start of his tenure with Osbourne, The Grail is one of Wylde’s most iconic instruments, many of which have been awarded similar nicknames. Initially cream coloure, The Grail was also the first guitar to feature Wylde’s instantly recognisable bullseye paint finish.

“I got her when I first got the gig with Ozzy. Scott Quinn, a buddy of mine who ran Garden State Music at the time, was a huge John McLaughlin fan and he said, ‘Zakk, I’ll trade you this guitar if you could talk to Gibson and get me a black double-neck’. I got him the black double-neck and I got The Grail. It was all yellowed and loaded with EMGs when I got it,” said Wylde. “I don’t think it even had the paint job yet when we were recording. When we were getting ready to do some photo shoots, I was like, ‘dude, I can’t have a clean Les Paul. It’s Randy’s [Rhoads] signature thing’. I asked for the Hitchcock vertigo design but it came back with the bull’s-eye on it. I had to do the photo shoot the next day so I was like, fuck it.”

However tragedy struck when the guitar was lost, having fallen out of the back of a poorly secured trailer whilst on tour.

“The thing was found in a pawn shop, where someone had sold it for $250,” said Wylde. “It’s beat up, and I suppose when someone walked in with it, they offered him $250. And the guy who bought it opened up the pickup cavity, and it had my initials on the bottom of the pickups. So he got in touch with one of the guys who does our website, and told him he might have one of my fiddles.”

“Ozzy got this guitar for me as a birthday present during No Rest for the Wicked, so it was probably my 20th birthday. He was like, ‘when Sabbath opened up for Mountain on our first trip to America, Leslie West was playing one of these things and it was the most insane guitar tone I’d ever heard,'” said Wylde. “I still use it for all the clean stuff I’ve ever done. Usually, it’s that guitar either through a Roland Jazz Chorus or through a Marshall—like a Bluesbreaker—at a low volume. Between that P-90 and the dried-out wood, those old guitars just sound good. It’s not a wall hanger, I actually use the thing, but it doesn’t leave the house.”

Wylde has a long tradition of naming his guitars, and The Rebel is one of his most iconic instruments.

“This guitar started as a black Les Paul Custom and I got it during No More Tears. Obviously, I painted the rebel flag on it because of the Allmans, Skynyrd, and everything like that. Everyone asked if I was from the South, and I said ‘yeah, South Jersey,'” said Wylde. “The bottle caps came from me drinking one night. I saw Bret Michaels in a Poison video and he had a rebel flag on one of his guitars. I’m buddies with him now, but then I was thinking, ‘I can’t be walking around with a rebel guitar. Bret Michaels has a fucking rebel guitar!’ That’s when the bottle caps came into it and I started to sand it down and just mess with it. We were just laughing about how you can see the change in the beer caps between Miller Genuine Draft and Bud then onto the microbrews and the local breweries. “One day we were doing a photo shoot and Ozzy was busting my balls about Southern rock. I was like, ‘where’s my guitar?” and I’m looking around because they want to get a shot of Ozzy and me with that guitar. I go outside and one of the guys had wrapped it up in newspaper and fucking lit it on fire! There was an eight-foot flame like at a Rammstein concert. I put the guitar out and look at Ozzy and say, “you really don’t like Southern rock, do you?” He was rolling on the ground laughing.”

This is one of Wylde’s favourite stage guitars, and is something of a tribute to the late Randy Rhoades. It was made by Californian lutheir Karl Sandoval, who also made guitars for Rhoades. As usual with Wylde’s others guitars this model is fitted with EMG pickups and is painted with white polka dots, as seen in the following video.

In 2015 Wylde launched his own brand of guitars, Wylde Audio. Teaming with Schecter, Wylde Audio have produced an array of different models of electric guitars and effects, many of which have been used by Wylde himself onstage.

The world was introduced to the young guitarist on Ozzy Osbourne’s 1988 album, No Rest For The Wicked. After successfully auditioning for the part, the recording sessions hit an early impasse once they received the first mixes back and decided to change direction. Wylde had been frustrated with the sound he was achieving with the Lee Jackson Metaltronix amplifiers and eventually confronted producer Roy Thomas Baker, who had notably helmed all of Queen’s classic 1970’s albums.

“I was talking to Keith about what I wanted from my tone, and I played him TNT’s ‘10,000 Lovers (In One),” said Wylde. “I was like, ‘Listen to Ronni Le Tekro’s fucking guitar!’ I had the Grail [Wylde’s1981 original bull’s-eye Les Paul], and Keith said to me, ‘All right, Zakk, plug into this.’ And it was a [Marshall] JCM 800 combo amp—the same one John Sykes used on the Whitesnake record [which Olsen co-produced]. We ran a line out to a Marshall 4×12 cab, I threw in my Boss SD-1 [Super OverDrive] and double-tracked everything. It sounded huge, and that was it.”

In fact Wylde has continued to use Marshall JCM800 amps throughout his career and uses them in combination with 200-watt EV speakers.

“Over in Europe, some of my speakers were (blown), and this guitar shop we went to, all they had were these 200-watt speakers,” he said. “So I stuck ’em in there, and at soundcheck that night it was like, holy shit! It was just so much cleaner.”

“For a lot of super-clean stuff, I use a Roland Jazz Chorus as well. They’re just amazing amps, especially for clean stuff,” said Wylde.

Over time Wylde switched to favour Jim Dunlop, who awarded him a signature series of pedals, including an overdrive and an MXR Chorus. For information on the Dunlop signature series see the video below.

Check out this diagram of his rig setup below GOING INTO THE SURROUND