The 10 funkiest jazz-fusion jams of all time 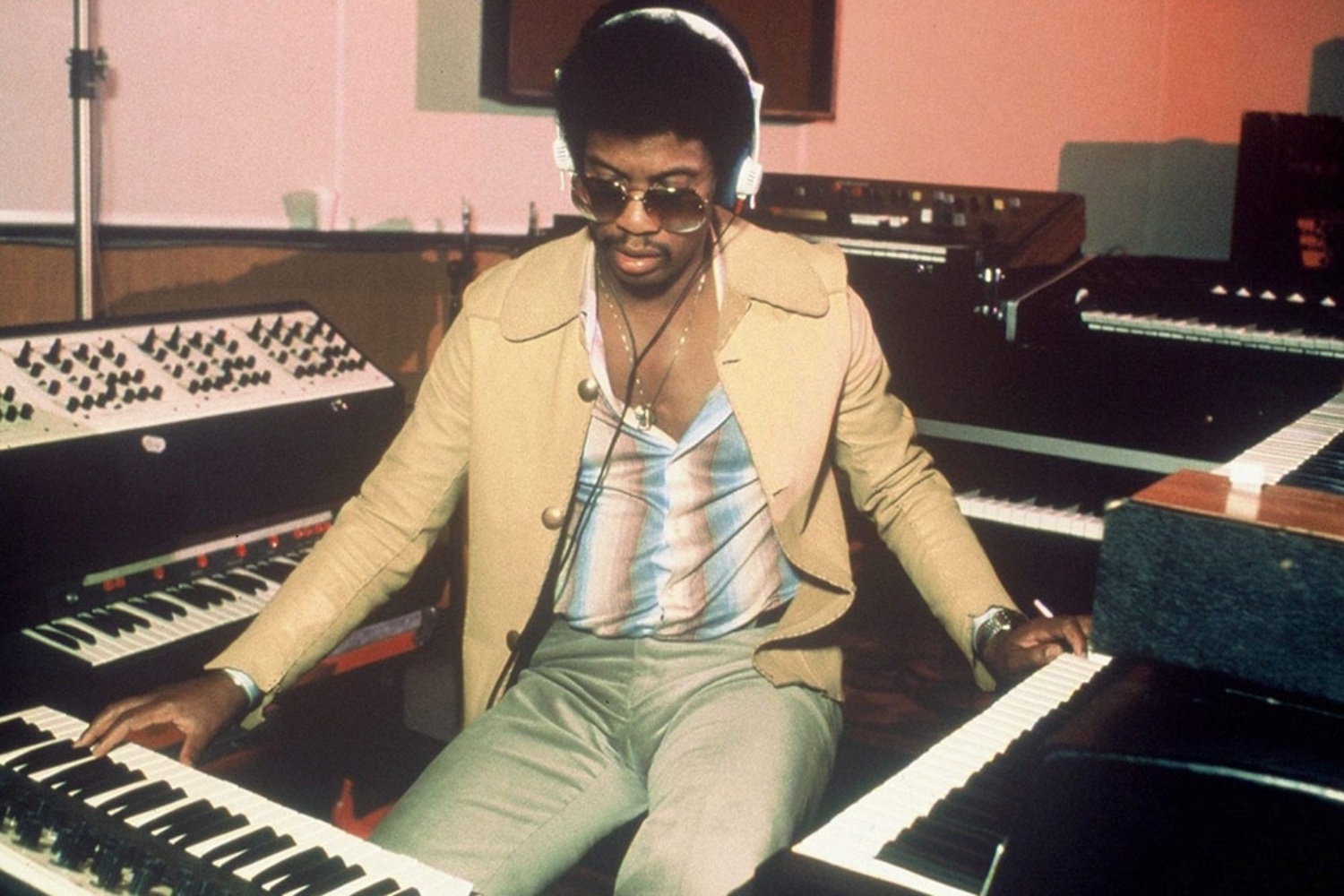 From George Duke through to Herbie Hancock and beyond, dig deep into these jazz-funk classics.

One of the most telling things about an artist’s innovative acumen is their ability to rework and fuse the pillars of jazz music within the bounds of their own creations.

Duke’s 1975 release The Aura Will Prevail is an often overlooked, yet hugely innovative contribution to the then-evolving concept of jazz fusion. By the mid ’70s, Duke had begun to discover his singing voice, and was dabbling in R&B vocals. However, this record showcases Duke’s greatest talent: instrumental jazz fusion.

‘Floop De Loop’ features an unrelenting, growling riff played by the tremendously underrated Alphonso Johnson, whose marauding bass runs will give you shivers. Leon ‘Ndugu’ Chancler, largely known for his drumming with Michael Jackson, provides an infectiously funky pocket that melds everything together.

Duke’s combination of Rhodes, clavinet and synth parts demonstrates his craftsmanship as a keyboardist, while his trademark use of the pitch bend on his biting clav gives an expressive aura to this tune that no other keyboardist could viably replicate.

Recorded within the space of two days, Pieces of a Man pushed more boundaries – musically and lyrically – than almost any other album of the era.

Gil Scott-Heron sings about finding a ‘home’ within his drug habits, despite harbouring a hatred for these addictions. But ‘home’ is somewhere you’ll always return to, even if you don’t particularly like it.

Scott-Herron’s genius lies within his ability to envelop the rawest narration of the paradox of drug abuse within one of the funkiest musical pockets to have ever existed. Prolific jazz double bassist Ron Carter supplies a chugging electric bass part, while the weird and wonderful Bernard Purdie sits behind the kit.

It is the jazz flair of these two rhythm legends that elevates this song from a lyrically potent poem to a jazz-funk masterpiece.

French studio stalwart Ludovic Bruni complements Allen’s crisp drumwork with an effervescent bass part, with all three musicians locking together perfectly whilst maintaining a loose rhythmic vibe that makes this song so alluring.

While this track may never have garnered the attention it deserved when released, it’s undoubtedly one of the finest songs released by the two collaborators throughout their respective careers.

Chick Corea’s 1976 record The Leprechaun is a real hidden pot of gold, featuring some of the most acclaimed session artists of all time.

On ‘Nite Sprite’, the keyboard icon is joined by Anthony Jackson on bass, who breaks pretty much every rule of jazz by using a phaser, plectrum and six string bass. However, this is what makes him a bona fide fusion legend, and his bass playing on this track is nothing short of astounding.

Steve Gadd also shows us his rhythmic prowess, with a solo that even the most technically astute drummer would struggle to emulate. Chick’s funky Hohner clavinet parts hold the mix together, while he throws in some characteristically quirky solos.

Esperanza Spalding is arguably one of the most talented jazz bassists and songwriters of the last 20 years. At the beginning of her career, her output was predominantly oriented towards traditional jazz covers.

However, as her profile as a composer grew, so did her ability to embed her exhaustive knowledge of jazz harmony within a variety of other genres.

‘Funk The Fear’ features on her 2016 concept LP Emily’s D+Evolution, co-produced by long-time Bowie collaborator Tony Visconti. The guitar part at the start almost sounds like a ‘Heroes’ inspired nod to the producer’s late friend, before the song slowly edges towards a ricocheting guitar and bass riff that propels the rest of the tune.

I would say that one of the most interesting things about Jeff Beck is that he’s not really a fusion musician. However, his 1975 record Blow By Blow is a superb example of Beck’s sheer versatility as a musician: throughout virtually every track, he submerges his blues-rock guitar style within a deep, clav-soaked, pocket-saturated puddle of groove.

While most people recognise this album for the melancholy ballad ‘Cause We’ve Ended As Lovers’, it’s the first track that takes the cake in the funk department.

Beck’s linear guitar riff runs in tandem with a puncturing synth line, while Max Middleton’s Rhodes and clav parts are bumped to the left and right channels of the mix, so as to create room for Beck’s soaring solos. I guess having George Martin producing your record would have its perks.

You know how jazz bassists have Jaco? And keyboardists have Herbie? Well, trumpeters and saxophonists have the Brecker Brothers.

Randy and Michael Brecker possessed an unparalleled mastery of their instruments, and were the most in-demand brass players of the ‘70s and ‘80s. This song from 1975’s The Brecker Bros tells us why. The Brothers tear through a blistering synchronised riff, which makes you realise why many a jazz band may shy away from covering this track.

Michael Brecker’s sax solo, filled with Coltrane-inspired hard bop lines, takes us on a kaleidoscopic trip through the cosmos that is jazz harmony. All the while, we’re deeply grounded in the funk, as Dennis Chambers and James Genus lay down a cascading drum and bass pocket on this live version.

Safe to say, this skunk funk is filthier than a trumpeter’s spit valve after a three hour set. An utter jazz-funk gem.

Earth, Wind & Fire are unquestionably the greatest band that ever did funk, and I would easily regard their 1977 album All ‘N All to be the high point of their discography.

Filled with masterpieces such as ‘Fantasy’ and ‘I’ll Write A Song For You’, it’s one of the record’s lesser-known tracks – ‘Magic Mind’ – that shows EW&F taking jazz-funk into their own, special stratosphere.

Keyboardist and musical director of the band Larry Dunn describes how they came up with the groove together in a little room, with Maurice using a slightly politically-incorrect working title whilst penning the lyrics.

The process in which the band turned a basic groove into a jazz-funk scorcher is testament to each member’s ingenuity. For starters, bassist Verdine White adds an octaver to his Fender Jazz, while the slippery brass lines highlight the insatiable influence of jazz music on the band’s trendsetting funk.

The guitar and keyboard parts also play important supporting roles, on what is an adrenaline-fuelled moment of brilliance from the funk masters.

Herbie, in a 2008 issue of Keyboard Magazine, offers an interesting reflection on how hanging out with Miles Davis completely transformed his view of jazz.

“Before I was with Miles, the only music I paid attention to and respected was jazz and classical – a very narrow viewpoint… I’d thought that this elitist attitude was a cool one to have. But Miles was listening to everything! That’s when I started opening up more and listening to James Brown, and, later on, Sly Stone. It changed my attitude completely.”

Herbie’s seminal Head Hunters LP is regarded as one of the most influential jazz-funk albums ever recorded. The rhapsodic third track, ‘Sly’, is the pinnacle of this album. Not only does it demonstrate Herbie’s newfound appreciation of funk, but also his willingness to expand the boundaries of the genre by infusing it with his own pioneering jazz-compositional style.

The track features one of the most gifted bassists of his era in Paul Jackson, alongside the subtle drumming of Harvey Mason – both of whom provide a rhythmic bedrock of the highest quality. Herbie’s clav playing from around the two minute mark simply cannot be described through the use of mere words; it’s something you’ve just got to feel.

There was no other bassist quite like Jaco Pastorius, nor will there ever be. There was also no other song that epitomised jazz-funk quite like ‘Come On, Come Over’, the second number from Jaco’s 1976 self-titled debut album.

It features legendary soul duo Sam and Dave on vocals, who each offer the heartiest of vocal takes. The Rhodes and Hohner clav layers are supplied by none other than Herbie Hancock, while the Brecker Brothers tear through the brass parts with typically great aplomb.

But where on Earth to start with Jaco’s playing? Let’s just say that Jaco was the only bassist with the gall to make the bass the focal point of a song, and to completely reinvent its role within a fusion band.

His bass riff on this track is undeniably catchy, while the biting sixteenth-note line he inlays underneath the chorus embodies the art of jazz-funk bass playing.

But when you’ve got Jaco, Herbie, and the Breckers all performing on the same recording, how can you not come up with the funkiest jazz-fusion track ever made?

Reckon you’ve got the funk? Put your chops to the test – here’s our top tips for funk-soul guitar tones. The story of Modular Recordings, told through 10 iconic tracks