It's Ausmusic T-shirt Day and we've got you covered if your workplace forbids the celebration!

Ever walked out of a gig so high on energy or still so captivated with whoever you saw you thought you just had to savour the moment with a t-shirt as memento? That is if you remember what live music is! You might remember that feeling you got after you washed it, only to realise it had shrunk and forever banished to the bottom of your pile.

But being Ausmusic T-shirt Day and being a Friday, we decided to put together 13 of the most iconic and best band t-shirts of all time.

Now we get it, it’s a very restrictive list and with so many to choose from, literally countless designs, we decided to choose the iconic designs that transcended the merch stand and entered popular culture itself. You can’t have an iconic band t-shirt list without Pink Floyd because like many on this list, they have too many to pick from. The increasingly-popular 1973 record The Dark Side of the Moon and the t-shirt design that followed has since transcended the band t-shirt community.

The triangular prism logo itself has surpassed that community and popular culture itself, and I mean with hits like ‘Breathe’, ‘Time’, and ‘Money’, the album is pretty bloody good too! If this tee doesn’t scream America then I don’t know what does. The Presidential Seal and a bald eagle holding a baseball bat? I mean, come on!

Nonetheless the logo is iconic and I’m sure almost every small market stall has ripped it off at some point because with how often I see it and on the demographic I see it on, there’s no way this many people have original shirts from the time. The design, colourway, and lettering are so simple, but this loud tee is instantly recognisable as it arguably pioneered simple t-shirt designs everywhere, notably in the sport-fashion industry. The cover of Sonic Youth’s 1990 album Goo features an illustration from Raymond Pettibon based on a photo of Maureen Hindley and David Smith, key witnesses in the 1966 trials of the Moors Murderers Ian Brady and Myra Hindley.

While it isn’t the most obvious image to become a cult classic, the album features their hit ‘Kool Thing’ which peaked at number 7 on the US Alt charts. Wayne’s World introduced one of the best band tees ever in Garth’s ‘Aero Force One’ shirt, but unfortunately it is no longer available, so we’ve found a suitable number one option, their 1977 record Draw the Line’s album cover.

Celebrity caricaturist Al Hirschfield drew the cover, and it was the band’s fifth studio album, reaching number 11 on the Billboard 200 in America. I know what you’re thinking, where’s the tongue?! Did I just get Rick-rolled?

Well, yeah. This list would be pretty boring and predictable with the classic tongue which is possibly the most iconic band logo of all time, but the album cover for Tattoo You is a great piece of work itself which celebrates 40 years on the market this year! The album kicks off with ‘Start Me Up’ which is one of their many, many most popular songs.

Also, do you know how hard it was to find another iconic Stones tee that could even shape up to the raft of tongue designs? 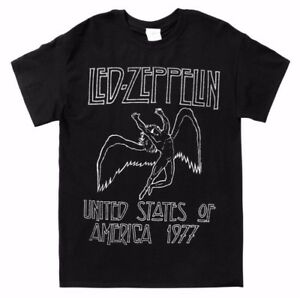 Led Zeppelin deserves a spot on any list involving the words ‘best’ and ‘band’, but this t-shirt is particularly important as it signalled the band’s eleventh and final concert tour of North America.

If you own an original, I’m willing to lay down an offer but like a lot of us, I wouldn’t get the pleasure of experiencing one of their final shows which must be a wild thing to have stored in your memory bank. When George Michael and Andrew Ridgeley wore the ‘Choose Life’ tees in their music video ‘Wake Me Up Before You Go-Go’, it became an instant classic. The slogan is promoting an anti-drug and anti-suicide campaign and was also worn by Queen drummer Roger Taylor in the band’s video for ‘Hammer to Fall’.

English fashion designer Katharine Hamnett designed the shirt and has since become famous for the invention of the slogan t-shirt which is printing political messages in large block type onto simple t-shirts. Journalist and co-founder of ZZT (Frankie’s record label) Paul Morley designed the tee as a conscious rip-off of Hamnett’s ‘Choose Life’ design, and boy it took off.

The BBC banned the group’s 1983 debut single ‘Relax’ in 1984 while at number six in the charts and it subsequently topped the UK Singles Chart for five consecutive weeks, going on to enjoy prolonged chart success throughout that year and ultimately becoming the seventh-best-selling UK single of all time. Many believe Kurt Cobain drew Nirvana’s logo which if you haven’t seen the same colour way or design, you’ve probably seen it worn several other ways on t-shirts no matter where you’re from.

The logo is simple but tied with the Nirvana name makes it even more iconic. Some of Cobain’s handwritten notes and drawings recently went to auction and displays more of his ‘artwork’. Depicted with a red, white, and blue colour scheme Grateful Dead’s ‘Steal Your Face’ logo was known to others as the ‘lightning skull’ shirt and is one of the shirts that stands out the most on this list.

The logo was developed in 1973 and began appearing on Grateful Dead merchandise that same year. If you want to be a little different and not wear a The Velvet Underground t-shirt with the iconic Andy Warhol banana on it, Nico’s lips drinking a coke is an incredibly stylish alternative.

The Pop artist became their manager in 1966 and they served as the house band at Warhol’s art collective known as ‘The Factory’. Andy Warhol, Nico, and Lou Reed. Iconic names, iconic t-shirt. Do we really need to say anything here? It’s an honorary position because their lightning bolt logo is so damn iconic it’s just a natural part of life now. The Aussie rockers are a band that you don’t seem to learn about, you’re just born knowing they exist.

They pip KISS on this list with the honorary iconic logo position due to my subjective position on their album covers being superior in aesthetic. Yeah, I said it.

Find out more about Ausmusic T-Shirt Day and remember to put it in your calendar early for 2022!