The Stone Roses’ eponymous debut in 1989 was a genre-bending rollercoaster that paved the way for Madchester. Developed in England in the late 1980s, the Madchester scene saw artists merging alternative/indie rock with tinges of psychedelia, ’60s-flavoured pop, and the emerging phenomena of house music.

While this unique genre faded out in the mid-’90s, the impact of The Stone Roses has lingered far beyond any expiry date, with the band arguably responsible for the success of contemporary darlings such as Oasis, Blur, and even acts today like The 1975 and Australia’s own DMAs.

In this week’s gear rundown, we take a trip down memory lane to check out the gear behind The Stone Roses’ excellent debut in 1989.

Perhaps Squire’s most eye-catching axe of his sprawling collection is this Hofner T4S. This model in particular sports a pair of F-holes, humbuckers, and is an incredible splatter finish, inspired from Jackson Pollock’s abstract works of art. 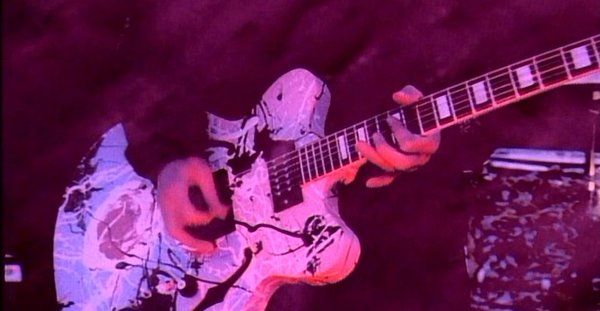 Squire was a huge Hendrix fan, and this all original 1960 shell pink Stratocaster is a perfect representation of that. This guitar lent its trademarked jangle and out-of-phase tones in tracks like ‘I Am The Resurrection’, ‘Shoot You Down’, and ‘She Bangs The Drums’. The extensive headroom and crystal clean chime of the Fender Twin Reverb was a perfect canvas for John Squire to shape his sound upon. In the early years of The Stone Roses, Squire would even use two of these absolutely monstrous amplifiers for an incredibly widened soundstage.

Squire started to make the switch to Mesa Boogie amps around 1988/1989. This vintage beauty beefed up Squire’s tone and saw its share of time on The Stone Roses’ live shows.

In the studio, Mani used a combination of an Ampeg SVT and an unknown Laney amp head and cabinet, as documented by producer John Leckie.

John Squire was the main sound-shaper in the band, and thus required an array of effects to form his multi-layered guitar tones. For dirt, Squire mainly used a Dallas Arbiter Fuzz Face and Ibanez Tube Screamer TS-9, stacked on top of each other at times for guitar solos. Check out the guitar solo on the studio version of ‘I Am The Resurrection’ for an excellent example of this in play.

On the contrary, Mani almost didn’t utilise any stompboxes at all. A Boss LMB-3 Bass Limiter/Enhancer and Boss TU-3 Chromatic Tuner were the only pedals he was caught with.