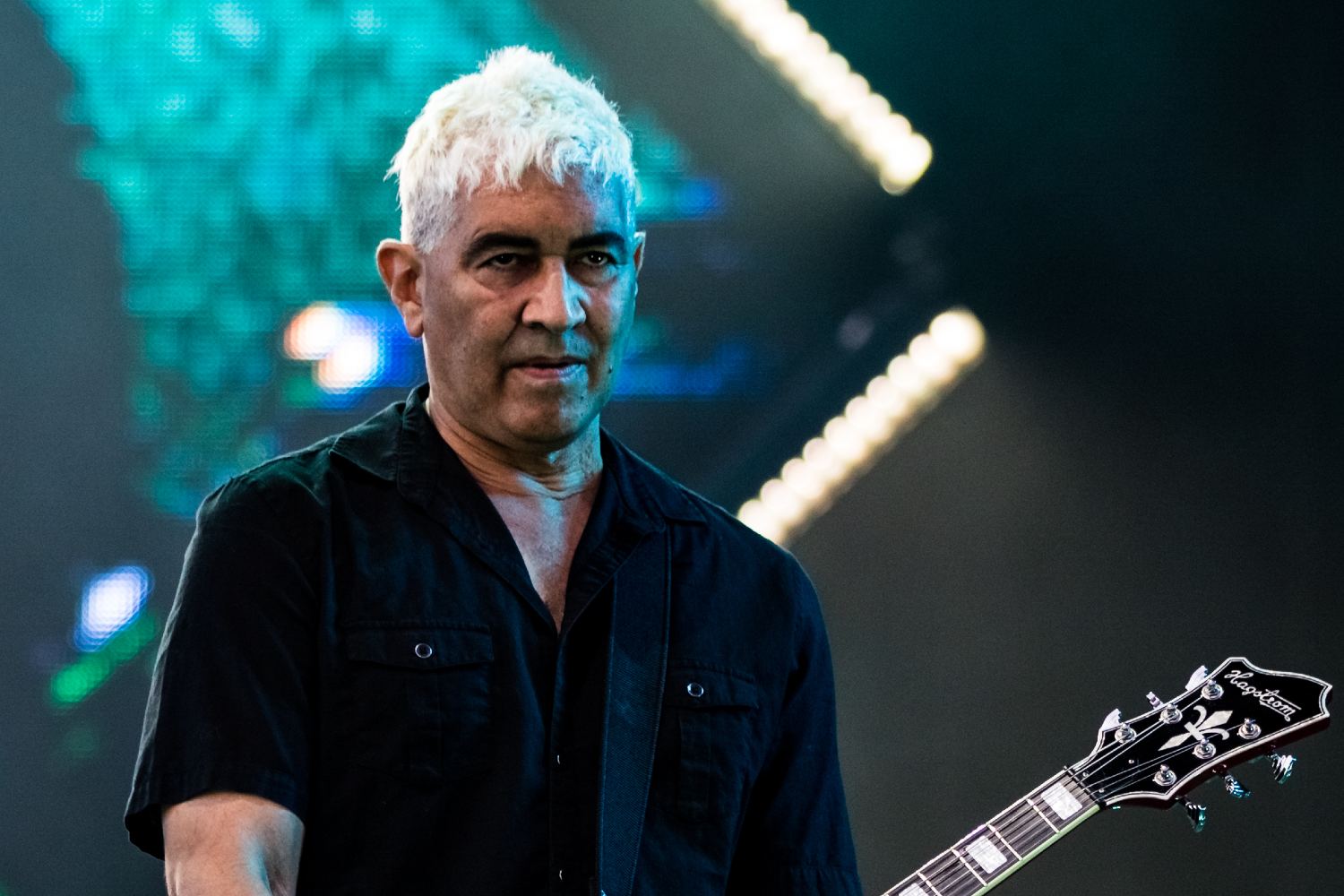 The equipment used in The Foo Fighters, Nirvana, and The Germs

Though it began as a solo recording project for Dave Grohl, the Foo Fighters have evolved to become one of the biggest bands on the planet, and guitarist Pat Smear has been an integral part of it since 1995.

Smear was a natural choice, having served as a touring member in Grohl’s previous band, Nirvana, following the 1993 album In Utero. Prior to this Smear was a founding member of the highly influential punk band The Germs, who were originally active from 1977-1980, releasing just one album, the Joan Jett produced (GI) in 1979. During The Germs’ career Smear played a Gibson Firebird, which he can be seen using in the documentary The Decline of Western Civilization.

During his tenure with Nirvana Smear played several different guitars, but most frequently he played Fender Stratocaster models, several of which were purchased for him by Kurt Cobain. One of those included a US-made Strat in Midnight Blue with a maple fretboard.

“We changed it to a black pickguard, with black Duncan JB in the bridge position and white covers on the stock neck and middle pickups—similar to Kurt’s black ‘Vandalism’ Strat, but a blue/black color scheme,” said Earnest Bailey, Nirvana’s long-time guitar tech.

On the In Utero tour Smear also used a black US-made Strat nicknamed ‘Glossy’, with a locked-down Floyd Rose bridge and a black DiMarzio pickup, as well as a Mexican-made black Strat nicknamed ‘Flopsy’, which he modified throughout the tour by adding different colours of nail polish to it.

One of the lasting memories of Smear’s time with Nirvana is the sight of him strumming a colourful Harmony Buck Owens American on their MTV Unplugged concert. The guitar actually belonged to bassist Krist Novoselic, which he bought from Guitar Maniacs in Tacoma, and outfitted with a Bartolini pickup, the same kind used in Cobain’s Martin D-18E for the MTV show.

However, the brand that Smear is most closely affiliated with are Swedish manufacturer Hasgstrom, which he also used extensively with Nirvana. His love for the brand began when he purchased a HIIN in red from Guitar Center in 1980 for $125. At different points he added a Duncan JB pickup in the bridge position and a 59 in the neck position.

With Nirvana Smear also played a Hagstrom III in black, to which he added a black Duncan JB and painted the chrome rings with nail polish, as well as a blue Hagstrom I with a Gibson tune-o-matic bridge, and a black Hagstrom XII with a Gibson humbucker.

After Nirvana came to a close, Smear played with the Foo Fighters from 1994-1997, before leaving the band for eight years. During those first three years he frequently played a three-pickup white Gibson SG Custom, which he now occasionally uses during the band’s shows.

Upon his return to the Foo Fighters as a touring member from 2005 onwards and then once again as a full time member in 2010, Smear almost exclusively used his collection of Hagstroms.

‘Pat has an abundance of Hagstroms at home including Swedes, Super Swedes, Hagstrom III, and more, and he is regonized as having one of the largest vintage collection of Hagstrom guitars in the USA’ reads the brand’s website.

Consequently the company decided to create a signature model specifically for him, launching the Pat Smear Signature in 2013. The model is based upon a custom made Hagstrom that he used frequently in his second tenure in the Foo Fighters, which itself was based closely on the company’s Super Swede and Smear’s beloved Hagstrom HIIN. The guitar features a pair of Hagstrom Custom 58 humbuckers with tone and volume controls for each and three-way switches. It has a mahogany body, a custom carved maple top, a mahogany neck and a fixed bridge with roller saddles.

Smear inherited this cabinet, which had Celestion 75 speakers in it, from Cobain when he upgraded to a new cabinet with Vintage 30 speakers, and used it during Nirvana’s live shows.

Smear subsequently used this combination during Nirvana shows and in the first Foo Fighters tours.

Never miss an update – sign up to our newsletter for all the latest news, reviews, features, and giveaways.