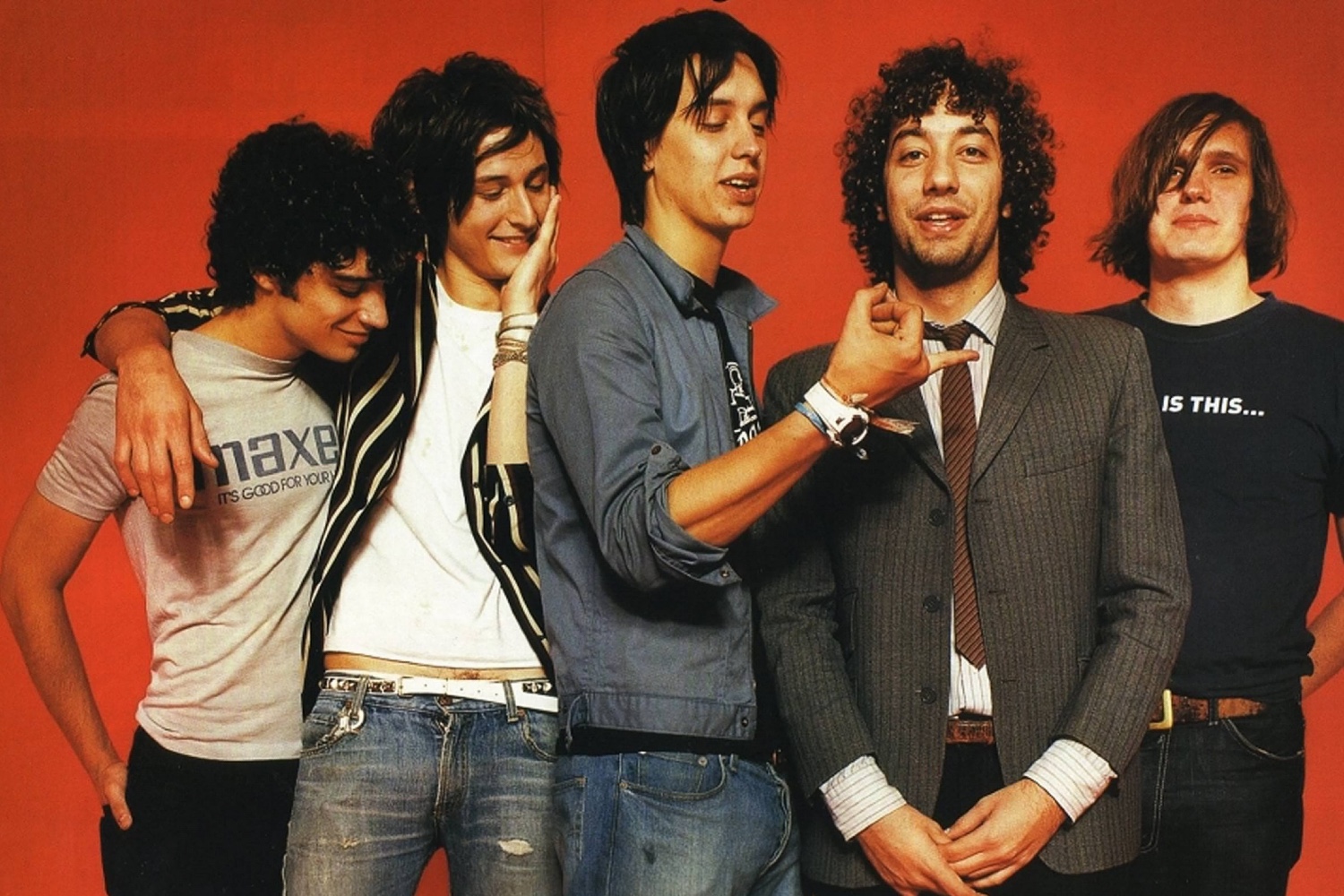 Dive into the gear of the indie titans.

It’s probably fair to say that there’s never been a rock band that’s had more of an impact on music, fashion, and pop culture in the 21st century than that of The Strokes.

Driven by the dual guitar powerhouse of Albert Hammond Jr. and Nick Valensi, the New York five-piece’s distinctive look and sound created thousands of copycat bands in the wake of their 2001 debut Is This It, with their subsequent effort Room On Fire further solidifying them as one of the hottest bands in the world.

With the band now back and sounding better than ever on their latest release The New Abnormal, we take a look at the gear of Valensi and Hammond in this week’s Gear Rundown. For years, lead guitarist Nick Valensi played a 1995 Epiphone Riviera, which he actually acquired from Hammond way back when The Strokes formed in 1999.

Calling it “the best guitar Gibson never made,” Valensi decked out the Riviera by removing the humbuckers and installing two hotwired P94 pickups, with the bright sound forming the core of his lead tone as well as the inspiration for Epiphone’s Nick Valensi Signature Riviera.

Valensi’s original Riviera was actually lost in 2016 on a flight from New York to Los Angeles; however, The Strokes managed to recover the (unfortunately damaged) guitar soon after. Purchased together with Valensi’s Riviera for $300, Albert Hammond Jr. chose his 1985 ’70s reissue Fender Stratocaster as his main guitar because he “looked cool wearing it,” and has played the Strat as his main guitar ever since, rarely performing or recording without it.

As such, Hammond Jr. has since been honoured with his very own signature version of this guitar by Fender, which you can check out here.

Slightly straying away from his Riviera on The Strokes shred-heavy third album First Impressions of Earth, Valensi sought out a Gibson Les Paul to play and record the heavier tracks on the record, including ‘Juicebox’.

While this guitar actually belongs to Valensi, it seems apparent that The Strokes are a generous bunch, and tend to share guitars around a lot – you can see Hammond rock this Les Paul Special with two P90’s in the music video for ‘Someday’.

Although there’s not a lot of footage of Valensi playing this one with The Strokes, he recorded a fair chunk of Angles with a custom made Fender Telecaster, which can be seen in the music video for ‘Under Cover Of Darkness’. Valensi also plays this a fair bit on stage with his current side project CRX. In a picture posted to Instagram, Hammond showed off his new Fender Mustang 90, released as part of Fender’s Offset reissue series.

While it’s unsure whether or not Hammond will use this live when The Strokes make their hotly anticipated return, there’s no doubt that he’ll look as fresh as ever with this bad boy slung over his shoulder.

Throughout The Strokes’ era of world domination in the early 2000’s, both Valensi and Hammond played almost identical rigs, sourcing the classic indie rock tones of a single Fender Hot Rod Deville 2×12 up until around 2005, when they began to add extra amps to their signal for larger gigs.

Hammond, on the other hand, plays an assortment of Fender and Hiwatt amps, and tends to play through a Fender Hot Rod with the grille removed when performing solo.

Known for their simple, bare bones driven sound, Valensi and Hammond have only expanded their pedalboards beyond the bare necessities in recent years.

Throughout the recording of Is This It and Room on Fire, the dynamic duo made use of nothing more than a Visual Sound Jekyll and Hyde Overdrive overdrive/distortion pedal, as well as an MXR Micro Amp for lead passages and guitar solos. Staying true to his roots, Hammond has only expanded his rig to cover the different tones used on The Strokes recent albums, including a Mad Professor Deep Blue Delay, an additional Jekyll and Hyde, a Stone Deaf Parametric Distortion Filter, and a BOSS TU-2.