Dissecting the gear behind one of the most revered tones in modern metal.

He’s certainly not the most enigmatic member of the band, but there’s no denying that Tool wouldn’t be anywhere near as cool as they are without Adam Jones.

Since the early ’90s, the soft spoken guitarist has laid down the shred for the lords of heavy polyrhythms through his distinctive guitar playing, and is often credited with evolving prog-metal guitars beyond crunchy riffs and high-paced solos with his intuitive use of effects, slides, and gadgets.

While we continue to wait for the release of new Tool material, let’s dive into the gear of Adam Jones and seek to understand exactly what is going on in the world of Tool.

Head to our Features section for Gear Rundowns, Interviews and more. Since the inception of Tool, Jones has favoured a highly sought after variant of the Gibson Les Paul decked out in a lavish finish known as Silverburst for the majority of the band’s work live and in the studio.

If urban legend is to be believed, the unique Silverburst finish provides a notable difference in tone due to the weight of the paint used, making it a highly desirable solution for solid rock tones.

Jones reportedly owns three models of the guitar, with his main model hailing from the first production year of 1979 and features a custom headstock ornament as well as a Seymour Duncan JB humbucker in the bridge position.

Some have even reported that the secret to Jones’ Silverburst tone comes from a stray nail or screw embedded somewhere in the body. Although he tends to rely upon his various Silverburst models, Jones occasionally uses other guitars in the studio, with this image from the early ’90s showing him using a Gibson Les Paul Classic in an Ebony finish, which was supposedly used on Tool’s 1993 track ‘Prison Sex’ as well as ‘Parabol’ and ‘Parabola’ from 2001’s Lateralus.

Jones has told Guitar World that he’s used a Gibson SG for “studio chores” at various times throughout his career, although there’s no images or videos on the internet to prove this claim. Classic Tool.

For years, Jones has extensively used a hot-rodded Marshall Super Bass 100 watt bass head from the mid-’70s, modified with both channels wired together for an insanely hot output and paired with a Mesa Boogie 2×15 bass cabinet.

Speaking to Guitar World about his amp setup, Jones discussed his love for the unpredictablity of vintage Marshall amps, saying, “The good thing about the solid-state stuff is if you know what you like, you can go to any store and buy exactly that. But with the tube stuff, you gotta find the amp and hold onto it. I’ve never heard two Marshalls that sound the same.” Although Jones tends to use these amps in a live setting, he’s certainly no stranger to experimentation in the studio, with his use of a Sunn Beta Lead on the recording of Lateralus  and a Roland JC-120 for various effects driven tracks on 10,000 Days being well documented.

Engineer Joe Baressi, who worked with the band on 10,000 Days, spoke to Mixonline.com about the process used to record Jones’ amplifiers on the album.

“Adam mainly runs three amps,” he said. “He has a Marshall that he loves, a Diezel, and then he was using a Mesa Boogie at one point. I brought in a Bogner Uberschall head and a Rivera Knucklehead Reverb, and several other things. Then we just experimented with combinations of heads and cabinets until it worked for the song.

“Most of the 4×12s were Mesa Boogie cabinets, which are superior for their low end, except for the Marshall head, which went through a Marshall cabinet, and the Rivera went through a Rivera cabinet. I usually used stock micing. For me, that’s a Shure SM57 and a Sennheiser 421 on every cabinet. The third mic could be anything that I felt the sound needed more of.”

In this video, Jones’ guitar tech Chris Leahey gives a brief rundown of some of the effects on Jones’ live board for Tool, including a Dunlop Heil Talkbox (used on ‘Jambi’), a Boss BF-2 Flanger, a DOD FX40B Equaliser, a Boss PSM Power Supply/Master Switch, an MXR M-133 Microamp, a Line 6 DL4 Delay Modeller, an MXR M-102 Dyna Comp, a Dunlop Crybaby BB-535 and a Boss DD-5 Digital Delay.

Leahey also discusses Jones’ use of the Roland PK-5 MIDI Pedal to control an Access Virus A synthesiser module, which you can hear around the 2.30 mark in the video. However, Jones’ pedalboard from Tool’s 2017 tour seems to have eschewed many of these pedals in favour of several custom effects units, as seen above, shrouding the process of Tool’s primary shredder further in mystery. 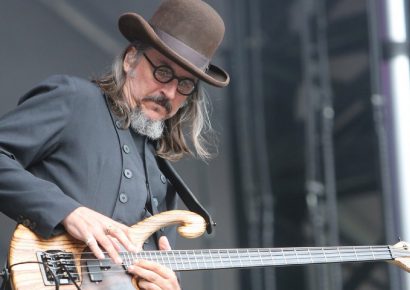