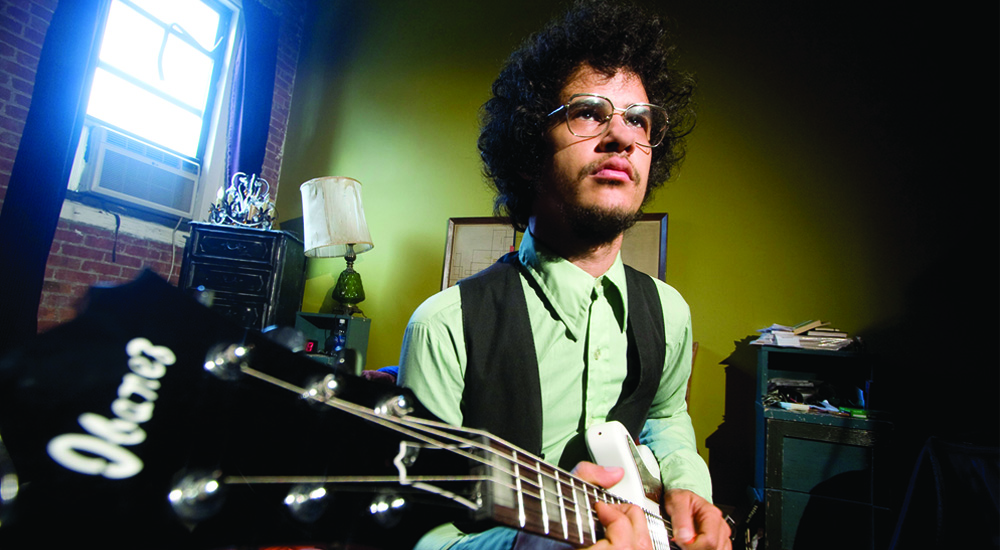 As his primary guitar throughout At The Drive In’s first tenure, it’s probably fair to say that Rodriguez-Lopez abused this guitar more than he actually played it. The Squier Supersonic was a limited production by the Korean Squier factory in the late ’90s, designed after a photo of Jimi Hendrix playing an upside-down Fender Jaguar – which, ironically, Rodriguez-Lopez flipped again to suit his own preferred left-hand playing. He modified his Supersonic by removing the neck pickup and the toggle switch, resulting in a stripped back beast perfect for his aggressive playing style in the Texan hardcore act.

Throughout The Mars Volta’s formative years, Rodriguez-Lopez played a customised Ibanez AX120, which was once again simplified to include a single Artcore Humbucker Blade pickup and master volume control knob.

While Rodriguez-Lopez also sporadically uses a standard Jet-King for live appearances, he also received a signature model of the offset guitar from Ibanez in 2008, modified to include the same specs as his own custom AX120. His signature Jet-King became one of his most used guitars while touring with The Mars Volta, as well as his various other live projects including Antemasque and Bosnian Rainbows.

Rodriguez-Lopez has owned this vintage Mustang since 2000, however, he began using it as his main guitar with Antemasque for their 2015 shows. Previously, he has discussed its use as a studio weapon in a 2010 interview with Guitar Player, claiming he only used it because “the album rejected everything else.”

Purchased from Chicago Music Exchange and used to write, record and tour Bosnian Rainbows’ first LP, Rodriguez-Lopez’s Supro Super features a unique 3/4 short scale, as well as an unusually short and thick neck. The guitar later became the basis for another custom Ibanez guitar, which can be seen below.

Throughout At The Drive In’s latest run of shows, Rodriguez-Lopez has been seen using a white Ernie Ball Albert Lee fitted with two humbuckers, adding yet another wildly designed guitar to his crazy arsenal.

For the majority of his tenure with both At The Drive In and The Mars Volta, Rodriguez-Lopez endorsed Orange AD140 heads, savouring the heavy saturated overdriven tones provided by the aggressive tonality of the amp. Proving a testament to the infamous volume of The Mars Volta’s live shows, he used to use four Orange AD140 heads in conjunction with two Orange 4×12 cabinets, which were all painted white in 2007.

However, for the touring of The Mars Volta’s final LP Noctourniquet, Omar switched to a single Orange Rockerverb 50 combo amp, stating in the above video that, “I just play the simple combo amp, you know, the Rockerverb 50 now, works best for me.”

Rodriguez-Lopez also enjoys to sit down and have a cuppa with his Vox AC30, which he prominently used around the recording of The Mars Volta’s Octahedron.

If there’s one thing Omar Rodriguez-Lopez is (in)famous for, it’s owning pedals – and lots of them. While his pedalboard changes with every new project he’s involved in (there’s a lot), he tends to run at least three delay pedals at once, as well as an MXR Phase 90, some sort of Bass Wah Pedal, a Chorus and a Pitch Shifter on the majority of his boards.

For The Mars Volta, Rodriguez-Lopez ran an insane board that consisted of tone treats such as the Moogerfooger Ring Modulator, EHX Big Muff Pi, Line 6 FM4 Filter Modulator, and a Digitech Synth-Wah Pedal.

Nowadays for Antemasque and At The Drive In, Rodriguez-Lopez runs a few custom pedals, as well as a Minifooger Chorus, Crybaby Wah, Ibanez Tubescreamer, Tonelock Chorus, Wampler Spring Reverb and a Death By Audio Echo Dream.