A Love Letter to the Enduring Magic of the World's Greatest Guitar Player.

In an era where there’s more rockstars dropping off their perch than there are emerging from the mud, it’s all too easy to throw around the term ‘legend’ around when analysing their work in post mortem. However, if there’s any one figure who should deserve such a title more than anybody, it’s Jimi Hendrix

Jimi, who passed away half a century ago at the age of 27, was a hurricane. Cited by most as one of the best instrumentalists of his era and quite possibly of all time, few guitarists have managed to surpass the influence Jimi boasts: one which is arguably even stronger today than it was on this fateful day half a century ago. Anyone who’s ever picked up a guitar will be all too familiar with the magic of his playing, but in saying that, it’s fair to assume that everyone who’s never picked up a guitar will probably be just as acquainted with it as well.

On a personal note – and please, pardon me for getting so whimsical here – Hendrix is nothing but a hero to me. His cutting edge synthesis of sounds, his dynamo guitar playing, his impeccable dress sense and his wildly psychedelic iconography – everything about him still enchants me now just as much as it did when I was a gung ho 13 year old, fumbling through the riff to ‘Foxy Lady’.

Hendrix’s talent on the fretboard eclipsed that of anybody else who came before and after him. With a flipped Stratocaster slung around his shoulders, Hendrix wowed the world with his wildly adventurous acrobatics, often tearing out his gobsmacking guitar solos while striking the strings with his teeth or blindly behind his head. Even as a nameless session guitarist playing with the likes of Little Richard, Curtis Knight and The Isley Brothers, Hendrix was prone to stealing the limelight, and it was this showmanship that would make him a legend in the early days.

Tales of him forcing Eric Clapton, then considered the greatest guitarist who ever lived, offstage with his head hung in shame – at his own gig and before Hendrix had even released an album, nonetheless – with his uncanny talents are deemed as culture shifting moments within the annals of guitar history, and the reverence shown to him by future heroes like Stevie Ray Vaughan, John Frusciante and John Mayer simply speak for themselves.

It was on his debut Are You Experienced? where the true power of Hendrix’s mastery on the fretboard come to the forefront. Recorded alongside the talents of drummer Mitch Mitchell – one of rock’s most underrated drummers, and a monstrous jazz drummer in his own right – and bassist Noel Redding – a guitarist-turned-bassist who recognised Hendrix’s sheer talent and sought to support him in every way possible – the Jimi Hendrix Experience’s debut album is recognised as one of the greatest debuts in history, and you’d be hard pressed to find a flat moment across its runtime.

From the feedback-drenched intro of ‘Foxy Lady’ and the warbling 3/4 groove of ‘Manic Depression’ through to the smokey balladry of ‘The Wind Cries Mary’, Are You Experienced? is a classic through and through. Preceded by some Hendrix’s best known cuts – while appearing on subsequent reissues, ‘Hey Joe’ and ‘Purple Haze’ were initially released as singles – the album features fan favourites like the proto-punk leaning ‘Fire’, the noodling blues of ‘Red House’ and the sheer psychedelic bliss of ‘Third Stone From The Sun’. It goes without saying that the impact of Are You Experienced? was immediate: the world had never heard guitar played like this before, and it’s arguable that it never would ever again.

However, Hendrix wasn’t just a great guitarist – in fact, it’s arguable that his influence away from the guitar is just as important as it was on it. A sublimely adventurous poet of the psychedelic era, Jimi possessed a talent for songwriting that remains far superior to that of many of his contemporaries: the emotional potency of ‘Little Wing’, an epic guitar ballad penned in memory of his own mother, or the metaphoric might of ‘Castles Made Of Sand’ on his second album Axis: Bold As Love are prime examples of his penmanship.

It was on this sophomore effort where Hendrix began to truly solidify himself as a titan. Songs like ‘Spanish Castle Magic’ and ‘If 6 Were 9’ were about as progressive as 1967 ever got, while the casual jazzy textures of alien ballad ‘Up From The Skies’ and ‘One Rainy Wish’ showed a much more soulful side of Hendrix that he’d rarely let the world glimpse at before. As if to exemplify what was to come next, Axis: Bold As Love ends on a high with the one-two punch of ‘Little Miss Lover’ and ‘Bold As Love’: the former an oft-sampled psych-rock staple, the latter heralded as one of the most important engineering feats of its era, due to the genius phasing, panning and reverse guitar trickery exemplified by Hendrix and his engineer Eddie Kramer during its epic final half.

In an attempt to further his status beyond that of a guitar maestro, Hendrix also showed immense prowess as a producer – a tantalising talent that was sadly never fully realised beyond Electric Ladyland. With legendary engineer Eddie Kramer by his side, Hendrix toyed with a studio ethic that was rivalled by few – when recording his third record, he’d often host ludicrously extravagant parties in the recording studio, with the chemical-fulled sonic binges often kicking on long into the early hours of the morning – a schedule that’d soon see him fall out of favour with Noel Redding, who would depart the Experience during the Electric Ladyland sessions.

It was through these sessions where Jimi would give birth to now-legendary cuts like ‘Crosstown Traffic’, ‘Gypsy Eyes’ and ‘Voodoo Chile’, as well as two of Jimi’s most definitive songs of all time: ‘Voodoo Child (Slight Return)’, a wah-wah drenched  reprise of of ‘Voodoo Child’ that was performed spontaneously for a film crew that walked into the studio, and ‘All Along The Watchtower’, a Bob Dylan cover that became so synonymous with Jimi’s name that Dylan himself would later attribute the song’s cultural significance to Hendrix’s own version. It’s this song that’s often said to be the most iconic in Jimi’s discography, and when you break the track down stem-by-stem, it’s difficult to disagree: if there’s any tune that exemplifies the instrumental and compositional talents of Hendrix best, it’s this one.

Around this time, Hendrix was also responsible for commissioning the construction of Electric Lady Studios, a cutting edge recording studio custom built to his own specifications that would later give birth to classic albums from the likes of Stevie Wonder, Patti Smith, D’Angelo, Daft Punk and Lorde. Although Hendrix would only use the studio a scant ten weeks himself before his passing, Electric Lady Studios has since been recognised as one of the best studios of the modern age, and it’s a given that its Hendrix-envisioned design is integral to its sonic success.

After the release of Electric Ladyland and an iconic appearance at Woodstock, Jimi would be forced into recording another album of original material at the tail-end of the ‘60s due to a long-standing legal dispute. Eschewing his tried-and-true chemistry with the Experience, Jimi would link up with two other African-American artists – his longtime military friend Buddy Box and the enigmatic singer/drummer Buddy Miles – for two  performances at New York’s Filmore East that would later go down in history when released as Band Of Gypsys: undoubtedly Jimi’s most unique record, and possibly even the greatest live album of all time.

Band Of Gypsys is a notable outlier in Hendrix’s catalogue for many reasons. Firstly, it was his first recorded effort with an all Black ensemble – some even speculate Hendrix linked up with Cox and Miles for the album due to pressure from the Black Power movement of the era, and its influence shows. In contrast to the rock-inspired bass lines of Redding and the jazzy grooves of Mitch Mitchell, Cox and Miles brought a level of funk that, in 1969, the world had rarely seen beyond the likes of James Brown: ‘Who Knows’ and ‘Message to Love’ are both shining examples of funk rock in its earliest phases, while ‘Changes’ and ‘We Gotta Live Together’ demonstrate the soulful vocal chops of drummer Buddy Miles in a manner that still manages to captivate listeners to this day: for a drummer to possess such a powerful voice was simply unprecedented.

However, if there was any crowning achievement on Band Of Gypsys, it has to be ‘Machine Gun’. Inspired by the carnage of the Vietnam War, ‘Machine Gun’ is certainly Hendrix’s crowning achievement as a musician. With an opening triplet strum pattern that’s not dissimilar from the stuttering three round burst of an M16 – the US Military’s chosen weapon of carnage at the time – ‘Machine Gun’ is completely apocalyptic. Feeding his guitar through a whooshing Uni-Vibe effect, Hendrix rips one of the most punishing, tortured guitar solos of all time, whipping up a punishing portrait of wartime carnage through his uncanny command of guitar feedback and effects pedals. It’s a spine-chilling moment that ranks as one of the most captivating solos of all time – to this day, I’ve still heard nothing quite like it.

One of the most tantalising ‘what-ifs?’ in music history is the question of where Hendrix was going to take his career beyond 1970, and what he would have done if he’d had access to the pioneering musical inventions that would emerge throughout the decade. It’s all too easy to imagine him sharing a stage with Parliament-Funkadelic, or perhaps helping Herbie Hancock and his Headhunters usher in a new era of jazz-funk – at one point towards the end of his life, he was even planning to create a supergroup with Miles Davis and Paul McCartney. It’s a given that Jimi would have linked up in the studio with Prince and become enamoured with the arrival of the synthesiser, and I can only imagine his delight at the prospect of sampling and sequencing electronic grooves. Hell, he probably would have even had it cut out for himself as a rapper if he wanted to take to the mic and really show off his lyrical talents.

Of course, none of that happened, and instead, at the age of 27, Jimi died a rockstar. Perhaps it’s these ‘what-ifs?’ that make the Hendrix myth just as compelling now as it ever has been, but it’s also amazing to look back on what Hendrix managed to achieve in the short time he spent on Earth. Even the swathe of unpolished and often-unflattering posthumous releases from the vaults of his estate have failed to tarnish his titanium status, and it should come to no surprises that his records continue to sell more each year now than they ever did while he was alive – but of course, that’s no way to measure his success.

Jimi’s influence upon music – and not just guitar music – remains unprecedented, and even though the instrument’s pop cultural dominance has since been eclipsed by subsequent musical inventions, Jimi remains a hero in the eyes of all kinds of creators. He’s the one who reminds you to wave your freak flag high and never let your spirit be compromised; the one who encourages you to work a little harder at your craft; the one who’ll you never press skip on, knowing you’ll surely be treated to some mind-blowing moment of magic, beaming out from the fingers and onto the fretboard. Jimi was, is and will forever be the world’s greatest guitar hero. 50 years from today, I’m sure I’ll feel exactly the same way. 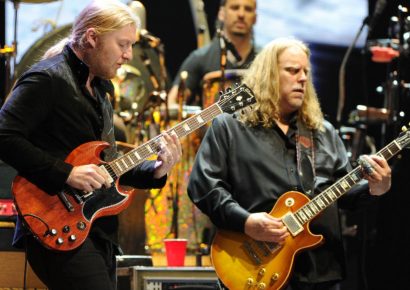 The 15 greatest slide guitar players of all time